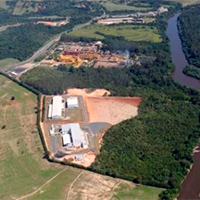 LANXESS inaugurated its new high-tech plastics plant in Porto Feliz, Brazil. The specialty chemicals company has invested around EUR 20 million (R$ 62 million) in the facility, which will initially have an annual capacity of 20,000 metric tons. Up to 50 highly-skilled jobs will be created.

The new plant is supporting above all the growing demand toward products for the megatrend mobility in Latin America. For example in Brazil, the fourth largest automotive market globally, a governmental program called “Inovar-Auto” has been implemented in early 2013. It offers fiscal incentives for OEMs that strengthen their production as well as their investments in research and development in Brazil and produce cars which are more energy efficient. With the new facility, LANXESS is able to meet the local demand for high-tech plastics used in the automotive sector more quickly and more efficiently.

"This major investment in a state-of-the-art compounding plant underlines our strong commitment to our customers in Brazil and Latin America, who can now count on local production, engineering and technical services as well as excellent product quality and customer service," said Werner Breuers, member of the LANXESS Board of Management.

In the new compounding plant, the basic polymers polyamide (PA) and polybutylene terephthalate (PBT) are mixed and refined with special additives and glass fiber, according to client requirements, to make the high-tech plastic product lines Durethan and Pocan. These innovative materials are used for the manufacturing of much lighter parts, which can replace metal components in vehicles, thus helping to reduce fuel consumption and CO2 emissions. With these materials, the automotive industry as well as suppliers can cut production costs significantly, increase freedom of design and improve safety. Due to their excellent properties, both plastics have a wide variety of applications, such as door handles, bumpers, front ends, cable connectors, cooling pipes, among others.

Since 2012, LANXESS has been greatly expanding its global production network for high-tech plastics. In Antwerp, Belgium, the company is currently completing a new plant for polyamide plastics. The world-scale facility is designed for an annual capacity of 90,000 metric tons and scheduled to start operation in the third quarter of 2014.

The High Performance Materials (HPM) business unit with roughly 1,700 employees worldwide is part of the Performance Polymers segment, which generated EUR 4.5 billion in sales in fiscal 2013. HPM is highly backward integrated in the value chain. It manufactures the precursors for its high-tech plastics, like glass fibers for the PA and PBT compounds, the polyamide 6 monomer caprolactam and its raw materials all in its own plants. The business unit is headed by Michael Zobel.

Porto Feliz is a large site for LANXESS with 310 employees. The business unit Rhein Chemie has been producing rubber additives for about ten years there. Since 2013, it also makes high-performance bladders at the site. In 2014, a new facility to manufacture pre-dispersed polymer-bound rubber additives will be added. The business unit Inorganic Pigments also houses a production unit at the site.

"We aim to transform the Porto Feliz site into a major specialty chemicals hub with the latest technologies for our customers in Brazil and Latin America," said Marcelo Lacerda, CEO of LANXESS in Brazil.

LANXESS has become one of the largest chemical companies in Brazil following its acquisition of Petroflex in 2008 and employs roughly 1,100 workers at seven sites. Brazil accounted for less than one percent of LANXESS’ global sales in 2005, but now generates roughly nine percent of global sales.LANXESS is a leading specialty chemicals company with sales of EUR 8.3 billion in 2013 and roughly 17,300 employees in 31 countries. The company is currently represented at 52 production sites worldwide. The core business of LANXESS is the development, manufacturing and marketing of plastics, rubber, intermediates and specialty chemicals. LANXESS is a member of the leading sustainability indices Dow Jones Sustainability Index (DJSI World and DJSI Europe) and FTSE4Good as well as CDP’s Climate Disclosure Leadership Index (CDLI).